The peaceful scene depicted in artist Cody Miller’s Manna provides a snapshot of a complicated and, at times, harrowing journey.  After more than four hundred years of captivity in Egypt, the Israelites, led by Moses, finally gained their freedom.  The victory songs of Moses and Miriam which comprise much of Exodus 15 reveal the joy the people felt.

Freedom, however, came with a new set of worries for the Israelites: Where would they go now?  What would they eat?  Moses and Aaron listened to endless complaints about the people’s concern that they would starve to death in the desert (Ex. 16:3).  But God made a promise to Moses: “I’m going to make bread rain down from the sky for you” (v. 4, CEB).  The Israelites called this food manna, which means, “What is it?”  The catch was that they could only collect as much as they needed for the day.  If they took more, it went bad before they could consume it.  They had to trust God to provide for them each day.

Miller depicts three generations of Israelite women collecting the manna.  Their palms are open in a posture of receiving — and a posture of prayer and praise.  In his own reflecting on Manna, Miller says, “[I] define manna as any grace that happens in our lives that is completely off our radar screen, whether given or received.”*  We find grace in giving, both in times of scarcity and in times of abundance.  We find grace in humbly receiving.  And we find grace when we trust that there will be enough for everyone, if only for the day. 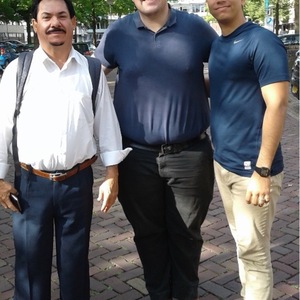 From left: Misterbino, a Cuban man who accepted Christ with us; pastor Haley; and Roberto Sharing Read More

My name is April McIntyre, and I am a Lay Minister working in a group of Read More