At an early morning church prayer meeting a few weeks ago, two stories I heard really encouraged me.  A man, whom I'll call Bob for this blog, told us about a time when he went to a local care home to visit his friend’s wife who had recently been admitted with dementia.  “How did you find Jesus?” she asked him.

They were long-time friends and she had heard his story before, but Bob told it to her again. As he was speaking, he noticed that someone appeared to be listening at the door, so he spoke louder. Later, when he left, he met a man just outside the door, crying — actually sobbing.  Bob asked, “What’s the matter? Can I help you?”  The man replied, “I loved your story.”  That began a conversation in which Bob introduced the man to Jesus.

The second story was told by a young man whom I'll call Cam. He told us that he shares a house with other twenty-somethings. On a Saturday night as he was preparing for bed, partiers started arriving at the house. The music grew louder and louder, and around 100 people flooded the place.  I’ll never get to sleep, he thought. And then he sensed God say to him, “Stay awake and sing over the people in this house.”  Cam thought, What? That’s crazy!  But he did.

“I didn’t sleep that night,” he said. “When I left for church in the morning, the place was trashed.” He made it through the morning church service just fine, though, and when he got home, the house was spotless!  “I got a sense of the Father heart of God that night,” he said, “and how much God loves my partying friends.”

I have friends and acquaintances with dementia. You probably do too. What an encouragement it is to hear of God working through circumstances where that dreaded disease is present. I also have beloved prodigals in my life. How wonderful to discover that God looks after them as well.  Not only does God hear all our prayers, but God is also continually at work answering them in creative ways! 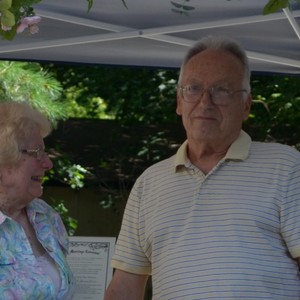 Larry and Jeannine at their wedding In my devotional for today, “God’s Wonderful Gift,” I wrote Read More

Our resolve must be different. My prayer is that we have finally reached a tipping point. My hope is that when the protests fade and the marches slow that our will as a church to truly eradicate the scourge of racism won’t dissipate but grows even stronger.”