Then John gave this testimony: “I saw the Spirit come down from heaven as a dove and remain on him.” - John 1:32 (NIV)

During the last days of my grandpa’s life, my family and I took a break from the hospice center where he was staying and went for a walk. We went to a nature center where I noticed some mourning doves flying around us. I remember thinking, Maybe God sent these...

Today's Prayer
Ever-present God, thank you for reminding us of your love in physical ways. Give us eyes to see the signs and wonders you place in our paths. Amen.
63 Comments
sorted by
Log In to leave a comment

1 Moses was taking care of the flock for his father-in-law Jethro, Midian’s priest. He led his flock out to the edge of the desert, and he came to God’s mountain called Horeb. 2 The LORD’s messenger appeared to him in a flame of fire in the middle of a bush. Moses saw that the bush was in flames, but it didn’t burn up. 3 Then Moses said to himself, Let me check out this amazing sight and find out why the bush isn’t burning up. 4 When the LORD saw that he was coming to look, God called to him out of the bush, “Moses, Moses!” Moses said, “I’m here.” 5 Then the LORD said, “Don’t come any closer! Take off your sandals, because you are standing on holy ground.” 6 He continued, “I am the God of your father, Abraham’s God, Isaac’s God, and Jacob’s God.” Moses hid his face because he was afraid to look at God. 7 Then the LORD said, “I’ve clearly seen my people oppressed in Egypt. I’ve heard their cry of injustice because of their slave masters. I know about their pain. 8 I’ve come down to rescue them from the Egyptians in order to take them out of that land and bring them to a good and broad land, a land that’s full of milk and honey, a place where the Canaanites, the Hittites, the Amorites, the Perizzites, the Hivites, and the Jebusites all live. 9 Now the Israelites’ cries of injustice have reached me. I’ve seen just how much the Egyptians have oppressed them. 10 So get going. I’m sending you to Pharaoh to bring my people, the Israelites, out of Egypt.” 11 But Moses said to God, “Who am I to go to Pharaoh and to bring the Israelites out of Egypt?” 12 God said, “I’ll be with you. And this will show you that I’m the one who sent you. After you bring the people out of Egypt, you will come back here and worship God on this mountain.”

I trust that God is always by my side.

Those in need of comfort 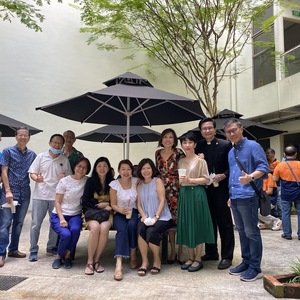