The angel went to [Mary] and said, “Greetings, you who are highly favored! The Lord is with you.” Mary was greatly troubled at his words and wondered what kind of greeting this might be. - Luke 1:28-29 (NIV)

A week before Christmas we arrived at the Nashville airport to head home. During the previous 11 days, my husband and I had spent many long hours helping with disaster response after tornadoes had torn through the area. We were exhausted and left with little time to prepare to celebrate...

Today's Prayer
Dear God, give us eyes to see, ears to hear, and minds to recognize your presence in the midst of our hectic lives. Amen.
59 Comments
sorted by
Log In to leave a comment

26 When Elizabeth was six months pregnant, God sent the angel Gabriel to Nazareth, a city in Galilee, 27 to a virgin who was engaged to a man named Joseph, a descendant of David’s house. The virgin’s name was Mary. 28 When the angel came to her, he said, “Rejoice, favored one! The Lord is with you!” 29 She was confused by these words and wondered what kind of greeting this might be. 30 The angel said, “Don’t be afraid, Mary. God is honoring you. 31 Look! You will conceive and give birth to a son, and you will name him Jesus. 32 He will be great and he will be called the Son of the Most High. The Lord God will give him the throne of David his father. 33 He will rule over Jacob’s house forever, and there will be no end to his kingdom.” 34 Then Mary said to the angel, “How will this happen since I haven’t had sexual relations with a man?” 35 The angel replied, “The Holy Spirit will come over you and the power of the Most High will overshadow you. Therefore, the one who is to be born will be holy. He will be called God’s Son. 36 Look, even in her old age, your relative Elizabeth has conceived a son. This woman who was labeled ‘unable to conceive’ is now six months pregnant. 37 Nothing is impossible for God.” 38 Then Mary said, “I am the Lord’s servant. Let it be with me just as you have said.” Then the angel left her.

Today I will look for God in unlikely places. 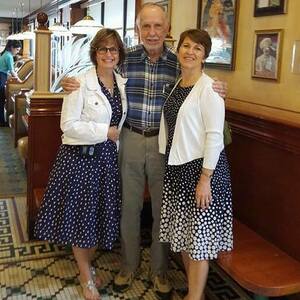 Jeanie's sister Marianne, Uncle Jack, and Jeanie The image of my 90-year-old uncle careening down a Read More

Getting ready to fly over Denali (From left: Carol, Lily, Sophie, Ron) At a waterfall outside Read More